San Antonio and Darmstadt – Looking to the Future with Optimism 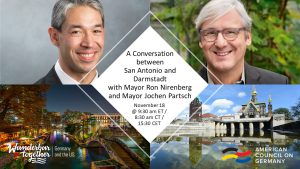 San Antonio and Darmstadt – Looking to the Future with Optimism

In 2017, Mayor Ron Nirenberg led a delegation of community leaders from San Antonio to Darmstadt to visit Lord Mayor Jochen Partsch and to sign a sister city agreement between our two cities. The delegation represented local government, education, business, and the arts. Roughly two years later, San Antonio welcomed Lord Mayor Partsch and a 28-member trade and civic mission which included 46 community events, meetings, roundtables, and site visits with City Council members, businesses, and arts and educational institutions. These interactions on the ground in each city established a solid foundation for the meaningful exchange of ideas. Our cities continue to learn from one another, strengthen bilateral collaboration on common challenges, and look to the future with optimism.

Our two countries share deep historic and cultural bonds, and today Germany and the United States maintain a range of partnerships in all areas of society – business and industry, foreign and defense policy, science and academia, and civil society – that make the German-American relationship particularly important. Much of the cooperation often occurs behind the scenes at the local level with little fanfare. Let us pull back the curtain and highlight the partnership between San Antonio and Darmstadt.

Darmstadt – known as “the City of Science” – and San Antonio have extremely strong cybersecurity resources and their universities are internationally known for their cybersecurity programs. As a result, the presidents of the University of Texas at San Antonio (UTSA) and the Technical University (TU) of Darmstadt signed a memorandum of understanding for cooperation in multiple fields, including cybersecurity, and have supported a variety of exchanges between the institutions.

Both cities bring deep expertise in cybersecurity. Darmstadt has its Fraunhofer Institutes and TU Darmstadt’s CYSEC and UTSA continues its expansion with their National Security Collaboration Center and School of Data Science. Having students, scholars, and researchers collaborating across disciplines and between countries will allow for increasing innovation and advancement.

Additionally, Southwest Research Institute, headquartered in San Antonio and one of the oldest applied research and development (R&D) organizations in the United States, has been engaged with Darmstadt, including a joint initiative on the Rosetta Project, the space probe built by the European Space Agency, which is based in Darmstadt. Bringing together research institutes in our two cities can also help us combat the negative effects of climate change by incorporating more sustainable methods into our municipal operations. Furthermore, we have opportunities to share smart city technologies and practices to deal with traffic and density issues are the populations in our two cities continue to grow.

Our two cities have also been fortunate to have a number of educational and cultural exchanges. Last year a group of high school students traveled to Darmstadt with Summer of Service San Antonio (SOS). There have also been exchanges involving chefs, musicians, actors, and contemporary artists just to name a few. Through citizen diplomacy, out residents learn how to understand and respect one another, helping strengthen the foundation on which we can build greater dialogue and cooperation between San Antonio and Darmstadt.

During the last few months, cities in both countries have been on the front lines of the COVID-19 pandemic, which has created a new set of challenges and prevented in-person exchanges. The pandemic has been a sobering reminder that all cities face many of the same issues – and that we can learn from each other as we work to meet the myriad challenges of public health, urban development and managing smart cities.

Earlier this week, our cities had the chance to discuss many of these topics during a virtual German-American Mayors Forum (https://vimeo.com/480885258), sponsored by the nonprofit American Council on Germany with support of the World Affairs Council of San Antonio. Our conversation highlighted the commonalities in our communities, the shared values that serve as the core principles of our societies, and the fact that there is much we can learn from one another. From time to time, national governments will take different positions, but our mutual understanding, respect, and cooperation will endure because of the shared values and close personal, social, business, and cultural ties that have been forged over the past 70 years since WWII and through sister city partnerships like ours.

As we adapt and strive to meet the challenges – and opportunities – of the 21st century, we believe that Germany and the United States – and indeed our two cities – are stronger together if we look to the future with common purpose, hope, and aspiration. The cities of Darmstadt and San Antonio look forward to continuing our partnership for many years to come.

This article complements a discussion on November 18, 2020 between Mayor Ron Nirenberg and Lord Mayor Jochen Partsch, organized by the American Council on Germany, with support from the World Affairs Council of San Antonio. This virtual event is part of the American Council on Germany’s series titled [virtual] Transatlantic Town Halls: German-American Mayors Forum, held under the auspices of WunderbarTogether USA 2020, a comprehensive and collaborative initiative funded by the German Federal Foreign Office and implemented by the Goethe-Institut.

Jochen Partsch has been Lord Mayor of Darmstadt since 2011 and is a member of the Alliance ’90/The Greens. After winning a “Digital City” competition in 2017, his administration has focused on implementing digital smart city technologies to build an urban digital ecosystem with tangible benefits for citizens together with the city’s partners from science, politics and business. Prior to his election as Lord Mayor, Mr. Partsch served on Darmstadt’s city council beginning in 1997, was the parliamentary party leader from 2003 to 2006 and led Darmstadt’s department for social affairs, youth, housing, labor market policy, women’s policy and intercultural affairs from 2006 until 2011.  Outside of politics, Mr. Partsch he has worked as a consultant and lecturer at the Darmstadt University of Applied Sciences focusing on community-oriented employment promotion in economically-disadvantaged regions. He graduated with a degree in social economics from the Georg-August-University of Göttingen.